Can I Give You A Hand With That? 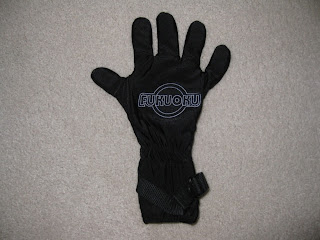 I bought this vibrating glove in Provincetown a couple of summers ago. Four of us went into the store, and three of us came out with one of these things. I don't know, maybe it was the demo. It actually felt pretty good when the sales woman gave us a little back and shoulder massage. Then again, she was wearing two of them and we had been out and about on the town all afternoon sampling cocktails from various establishments. And she was probably cute.

This glove has been sitting in my t-shirt drawer ever since then. In actuality, it really doesn't give that great of a massage. And it sounds like a swarm of hornets. There are 5 little mini vibrators in it and you would swear you had just whacked open a hornet's nest when you turn it on (and that's on low speed).

Ok, I know some of you are thinking at this point that maybe this really wasn't designed to be used on your neck. I'm not even going to go there. That's an even scarier thought. Can you even imagine trying to brush the snow off your car with this thing? :)
Reviews You Really Don't Need

Anonymous said…
I'm curious about the word on the glove. Is that some kind of advertising or perhaps subliminal message?

Does it translate to 'sucker'? for buying the dang thing?

Martini Cartwheels said…
Hey Blondie - Yes, you are correct. That is exactly what it translates as.

Unknown said…
I got invited to some sex toy party and I swear they were selling a glove just like that!! You should list it on ebay. People pay big bucks for that stuff!!
July 27, 2008 at 11:37 PM

Unknown said…
OMG!! I should have read the other posts to this before I commented. You dirty ho! LMAO that is a sex glove! Look at you being all coy in that you bought in "some store". I am rolling on the floor. It's for your neck...my aunt fanny!! LMAO
July 27, 2008 at 11:39 PM

Ellie Creek Ellis said…
I have NEVER heard of a vibrating glove...maybe it is a blessing i live in Montana! haha

Martini Cartwheels said…
Hey Sassy - I find it's much easier to browse thorugh one of those shops after spending a couple of hours at Tea Dance. And bring friends with you - I wouldn't want to be caught wandering around in that store alone.
July 28, 2008 at 6:03 AM

Martini Cartwheels said…
I agree Ms. Creek - the ebay suggestion is probably the best way to go. Maybe I could wrap it up and put it someone's stocking this year.
July 28, 2008 at 6:05 AM

Martini Cartwheels said…
Wendy I swear the only places that thing has been are on a few shoulders and my dogs back! And no, she didn't like it either.

Janet said…
Oh good glove - just give it a whirl (you don't have to blog about it).

I am not sure about ebay -- don't think there's much of a market for used sex toys *but* what do I know. It doesn't sound very appealing though.

The only used sex toy I want is Jackie Warner.

Cristina said…
Hey CJ, how 'bout the office auction. Now seriously, I would have to drink my way up and down Commercial to even window shop, forget the Tea Dance.
July 28, 2008 at 2:44 PM

Cristina said…
Oh, and you went in kicking and screaming not really, but your hat pulled way down over your eyes so no one knew you were there.
July 28, 2008 at 2:44 PM

Martini Cartwheels said…
MLC you have a good point. Guess I never considered it really 'used'. It's back to the drawer with it.

Now there's an idea Shrinky. There's got to be somebody out in blogland who would want it. I would hate to meet them however.

It's made of nylon Chewy. I don't know how it could even be washed. (Another reason not to use it for anything other than a backrub). LOL at you second comment.

Cristina it was those other girls begging me to go into the store with them. They came out with more goodies that I did (I think). Next time we are down there at the same time we should brave it together and check out both stores. (What do you mean you didn't know there were two?)
July 29, 2008 at 5:05 AM

Anonymous said…
My vote is for the office classifieds. If the used box of Taffy sold just imagine what the vibrating glove would fetch!

You could say it was a gift.