First, some background from the Loudoun Govt site:

Eugene Delgaudio was elected to the Board of Supervisors representing the Sterling District in November 1999, and was re-elected in 2003 and 2007. He serves on the Board of Supervisors’ Public Safety/Human Services Committee, and represents Loudoun County (Virginia) on the Dulles Area Transportation Association (DATA). He served as Executive Director and is now President of Public Advocate of the U.S., a conservative non-profit organization which supports a program of limited government and reduced taxes.

My sister received a packet in the mail, addressed to my father, from the Public Advocate of the U.S.. Included in the packet was a American Morality Survey, and a three page, double-sided letter. Here are some excerpts:

The Radical Homosexuals are storming through Washington demanding passage of their agenda. And with the defeat of the Republicans and election of Barack Obama, they say NOW is the time to push their perverse "life-style" on every
man, women and child in America.

And they insist YOU actually support them.

Samuel, is it true? What do you say?

Ummm, yeah, you big dummy. Samuel thinks you are an idiot although he is not saying much these days. He has been dead for nearly six years. And his youngest daughter (that would be yours truly), is a big ol' lesbian. And Samuel never had a problem with me being gay. In fact, he was/is quite proud of me.

Here are few more gems from the letter:

Same-sex marriages and adoptions. Wedding-gown clad men smooching before some left-wing clergy or state official is just the beginning.You'll see men hand-in-hand skipping down to adoption centers to "pick out" a little boy for themselves.

Eugene, were you dropped on your head as a small child? I mean, c'mon, you know you sound crazy right? I guess some people will do anything to get their 15 minutes of fame.

You are a little man Eugene and you live in a world where you are afraid equal rights for all will somehow strip you of what little power you think you have. I almost feel sorry for you.

And here's a little advice. You may want to stop randomly mailing folks in Massachusetts. We are a liberal state, one that values the civil rights of everyone, and you probably sound more of ass here than you do in some other states, if that is actually possible.

I can't wait to fill out the survey. I am going to call Eugene's office tomorrow. And I am thinking of videotaping it for the enjoyment of all. 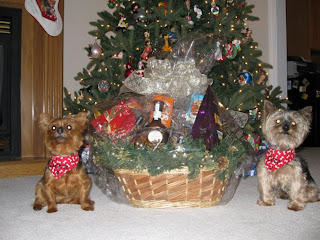 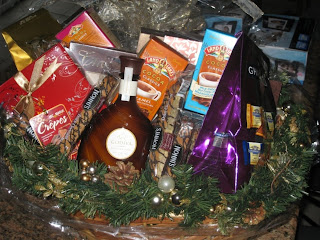 This beautiful basket is a gift from H & B. I'm pretty sure, with a little reinforcement, that it can double as a pool float this summer. The thing is huge and filled with lots and lots of goodies, including several varieties of hot chocolate, boxes and bags of chocolate candy, and a bottle of chocolate liquor. It was opened this morning, just in time for breakfast. Yummy! I'm now looking forward to lunch.

Thank you H & B! You two rock!
at December 24, 2008 5 comments:
Email ThisBlogThis!Share to TwitterShare to FacebookShare to Pinterest
Labels: Holiday Antics, Life in Western Mass 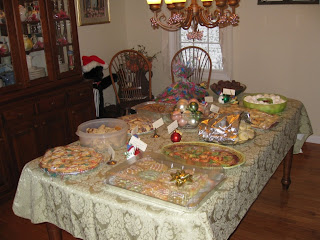 The concept of the swap is that everyone brings 5 dozen cookies to share with the group. In turn, you get to bring home a stash of goodies baked by others. My favorite turned out to be the Pinot Grigio cookie, which was served chilled in a beautiful white wine glass. 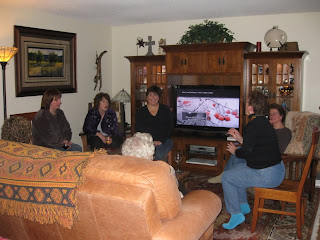 McCheesy kept things lively with great food and wonderful conversation. And her cookie contribution this year was outstanding - a delicious lemon cookie sprinkled with gold flakes. I brought enough home to make a ring. 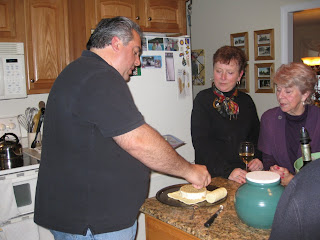 McMeaty served up a cooking lesson for the ladies. He showed us how to make a wonderful baked brie inside a pastry crust, sweetened with brown sugar. It was sooo good. I'm not much of a cook but I did learn a few things. For example, I leaned that I am absolutely clueless around a kitchen. Oh wait, I already knew that.

Everyone had a really great time. Thank you to McMeaty and McCheesy once again for such a fun event. You truly are the best neighbors anyone could wish for!
at December 19, 2008 11 comments:
Email ThisBlogThis!Share to TwitterShare to FacebookShare to Pinterest
Labels: Life in Western Mass

I'm Out Of Legs 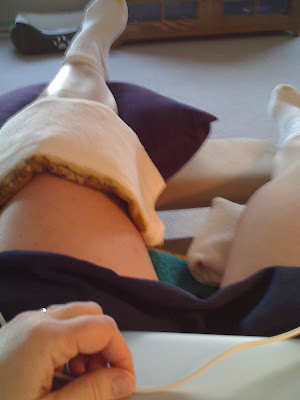 I woke up yesterday with an itch behind my right knee. Probably a little bite I thought, from some critter one of the dogs dragged in or from a spider in the basement. By last night, it was red and swollen. By this morning, even bigger and more red. Before deciding to head off to the ER, I gave my doctor a call. The MD covering told me it was probably some sort of bite, to put some hydrocortisone cream on it, and to come into the office tomorrow if it wasn't better. Good advice, except now there is a ring around the site with is sort of wigging me out a bit. I am currently icing it.
Part two. I went down to the basement to change the filter on the water softening system for the house. The filter sits in a cup like holder that screws onto the tank by some grooves in the top of the holder. I shut off the water, relieved the pressure in the system, and collected the water that dripped out into a dishpan. I then began to unscrew the holder, using the tool that came with the system - a hollow ring with a handle that you place around the holder and twist.  The holder was on pretty tight and I gave it a good twist, which then caused my ACL-less left knee to pop out and buckle. Then I went boom, down on my ass, into the water-filled aforementioned  dishpan and on to my side whereupon I screamed some profanities and Blondie came running down the stairs to save me. I am currently icing this knee as well.
So now I am on the couch, wondering if I will actually be able to walk once I get up and if I will be on my way to the ER at some point tonight for that monster bite which is itching like crazy.
I couldn't make this shit up if I tried.
at December 14, 2008 13 comments:
Email ThisBlogThis!Share to TwitterShare to FacebookShare to Pinterest
Labels: Don't Try This At Home, Life in Western Mass

The doorbell rang this morning as I was drinking my strawberry banana smoothie for breakfast. Thinking it was either UPS or a neighbor, I got up, one barking Yorkie tucked under my arm, and opened the door.
I was surprised to see a man and a woman, nicely dressed, carrying some literature. "Oh, oh", I thought, "now I'm trapped, like a caged animal." They were very nice. They spoke briefly, offered me a pamphlet, which I accepted, and left.
I thought these folks would usually try to work their way into the house in order to try to sell you on their religion. Not this time.  And now I think I know the secret to prevent this from happening. I had answered the door still wearing the white t-shirt I wore to bed. And it was cold out. And I hadn't realized how much the shirt has shrunk. That's one way to get my point across without even opening my mouth.
at December 06, 2008 13 comments:
Email ThisBlogThis!Share to TwitterShare to FacebookShare to Pinterest
Labels: Life in Western Mass, Tips and Unsolicited Advice

Objects May Have Shifted During Travel 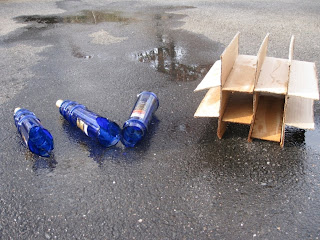 No use crying over spilled milk. I'm ok with that. But spilled wine, that's a different story.
The box was in the back of my SUV. I lifted the hatch and before I could react, the whole case fell on the driveway, leaving me with a look of shock and horror. "This can't be", the voice in my head yelled as my Diamond Light from Truro Vineyards on Cape Cod smashed and bled all over my driveway.
I was able to salvage 8 of the 12 bottles. After picking up the shattered glass and and licking the driveway dry, I decided that tonight is probably a good martini night. Wahhhhhhhh!
at December 05, 2008 12 comments:
Email ThisBlogThis!Share to TwitterShare to FacebookShare to Pinterest
Labels: Life in Western Mass 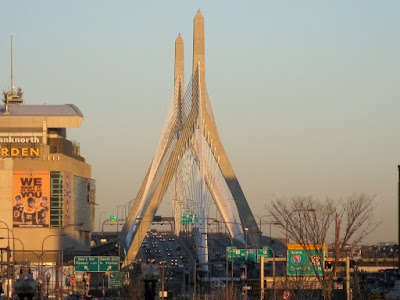 The Leonard P. Zakim Bunker Hill Bridge, part of The Big Dig Project in Boston, is the widest cable-stayed bridge in the world. The Bridge serves as the northern entrance to and exit from Boston. The Bridge is named after civil rights activist Lenny Zakim and the American colonists who fought the British in the Battle of Bunker Hill.

I took this picture from the parking garage. I've never actually been over this bridge, I just thought it looked cool in the morning light.

As a side note, I still have not given my notice yet. My start date for the new job got moved up to after the first of the year because the University closes for a week at Christmas. I couldn't really start much before that due to obligations at my current employer. So, Monday will be the big day. Yikes.
at December 05, 2008 6 comments:
Email ThisBlogThis!Share to TwitterShare to FacebookShare to Pinterest
Labels: Reasons to Love Boston
Newer Posts Older Posts Home
Subscribe to: Posts (Atom)