- March 03, 2008
I recently got a cute email that was entitled "If You Were A Little Girl In The 70's..". The email described many of the things you may have owned if you were a young female during that wonderful era. Here is one of the items: 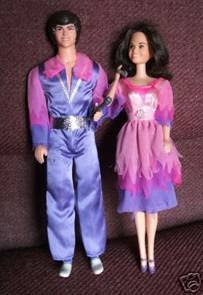 I did not own these. Because I wasn't a little bit country or a little bit rock and roll. I was a little bit lesbian. Sure, I had the bike with the banana seat, the Magic 8 Ball, and the soundtrack from Grease. But my taste in dolls was a bit different. I owned this: 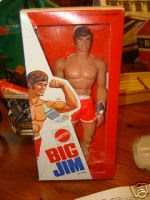 I also had Big Jim's buddy Big Josh. They would travel around my room in their Big Jim Camper, complete with sleeping bags and cooking utensils. I don't know if Big Jim and his friend were more gay or if I was. Oh well, at least I never lived in the closet next to a Magic 8 Ball.

Anonymous said…
my banana seat bike was purple. does that qualify as an early indicator of anything?

Velvet Ginger said…
How funny!!!! I didn't have a donny & marie set...I DID have a Mary Poppins Doll though! Have any of you heard of the James & Josie West set? Our neighbor girls had it and gave us a few of the rejects when they got tired of them!
Thanks for sharing.
March 3, 2008 at 6:50 PM

Anonymous said…
I had a Big Jim doll too!

But my absolute favorites were the Sunshine Family barbie-like dolls. They had cute Precious Moments faces and there was a Mom, a Dad and a baby.

I also had a Chatty Cathy doll (not a barbie type doll but a doll doll) but I cut her hair short and made her a Chatty Chuck.

Hmm... is that an early indicator? I was definitely NOT mean to be a hair stylist, I can tell you that much!

Oh! And what about the Archie Bunker nephew doll that had a little penis? I had one of those too but I couldn't let my mom know about THAT one.

Anonymous said…
I'm a bit older. I had GI Joe. I asked for him. Then I got Barbie. I didn't ask for her. I settled by playing Tarzan with them. Joe was Tarzan and Barbie was Jane. Both clad in scraps of leopard material swinging on ropes I tied around my parents' bedroom. Ha!

Also Rat Patrol, all the guys, and a cool jeep with a gun mount, the robot from Lost in Space and Ben Cartwright and his horse. Yee-haw!

Martini Cartwheels said…
As long as you never asked for a pink bike Lynt, I think the purple one may qualify you for a toaster oven.

Hey OC. I laugh when I think about it now but those things were so cool at the time.

I agree Rita. The boys had toys that were way more fun. I'm lucky my parents didn't mind buying them for me.

Love the Paper Roses and the Chatty Chuck references Blondie. LOL. The Archie Bunker newphew doll and the Sunshine Family are new to me.

Hey Chewy - Glad to hear your posting again!
That was very clever of you to incorporate Barbie into the scene with Joe. Funny you got her without asking.
March 4, 2008 at 9:31 PM