- March 14, 2008
I know Evacuation Day doesn't officially occur until March 17th, but I couldn't wait to start the celebration. It's one of my favorite Suffolk County holidays! And besides, who doesn't love a three day weekend in the middle of March that just happens to coincide with St. Patrick's Day.

Ok, for those of you still confused, here's the low down. In March of 1776 the Continental troops forced the British army to evacuate Boston. In 1901 Evacuation Day was created as an official holiday to be celebrated in Suffolk County, Cambridge, and Somerville.

Even though I do not live in Boston anymore, working there does have some perks. And this is one of them. As is Bunker Hill day in June but that's a topic for another post.

So fire up your muskets and grab a mug of green beer. It's time to celebrate! 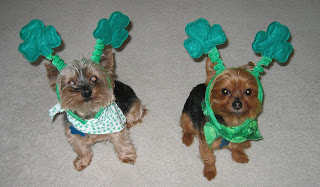 Martini Cartwheels said…
Well sorta. They didn't like it very much. Wouldn't Dude look cute with some shamrock ears?
March 14, 2008 at 6:08 PM

Martini Cartwheels said…
I see Robert has been honing his psychic abilities. There is this St. Patrick's Day party I am going to this evening. ....
March 15, 2008 at 1:49 PM

Martini Cartwheels said…
Hey Lynt - No worries about the double comment or spelling. I'm famous for both.

I did notice one thing missing however... where is their green beer?