We got to the St. Patrick's Day parade, held last Sunday, bright and early at 10:00am. The parade started at noon and our spot was near the end of the route, meaning the parade wouldn't come marching by until 1:30 or so.
We had our chairs, cooler, sandwiches, and beverages all ready to go. We alternated members of our group, some staying inside the pub to hold our place in the corner, some venturing outside to watch the parade. I was quite content sitting in the sun, watching the parade, and enjoying a beverage. 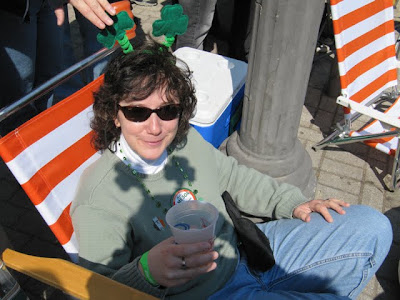 I love bagpipes and was glad to have a perfect view of the marchers. 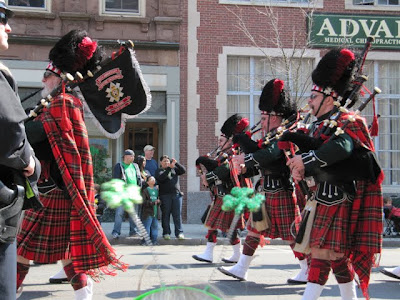 Then a funny thing happened. The bright and festive colors of the parade suddenly began to fade into an ocean of blue. 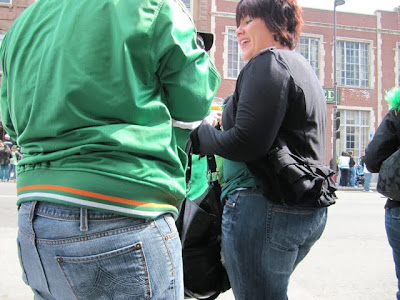 Oh my eyes! Despite numerous requests to move, these bums of the SS Ahole remained firmly anchored in front of my chair. 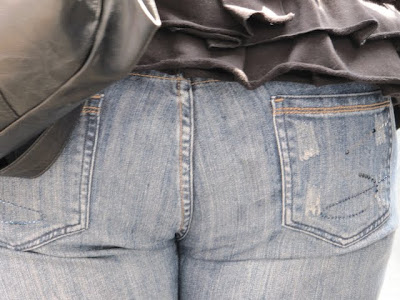 I stood up, turned around, and started my own parade - right back into the pub. Bummer.
at March 24, 2010
Email ThisBlogThis!Share to TwitterShare to FacebookShare to Pinterest

lol. i think you got back at them... and rest assured, i would never park anything i didn't want photographed and shared anywhere near you!

should of put one of those green clover antler things up someone's blue butt...you did have a good seat for awhile though.

You asked them politely and they wouldn't move? OMG I hate people like that. I hope they find out about this blog and see themselves on their and their fat asses!

Well at least ONE of them had an ass, the other must had been a plumber. Little hint; I always borrow my grandmothers wheelchair. When you sit in wheelchair people are a lot more polite. They may even get the beer out of the cooler for you.

Well that is just rude. Wouldn't have been so bad I guess if it were some cute butts.

Oops did I get side-tracked? That whole wheelchair idea really is brilliant. And fun too. You can take turns riding later. Just sayin.

Oh and the A-hole that wouldnt move? I might have accidentally bumped th back of their knee. Just sayin.

I discovered when I was stuck in a wheelchair for 3 mos. that people were just as rude as ever! It did not win be any opening of doors or moving asides.

Next time you go to a parade, just strap a gun to your leg, you know, real visible-like.

Oooooooooh, you are a better one than me, I tell ya'! I would've felt compelled to move their fat, lardie-bums out of the way, grrrrrr! Mind, I would probably have lived to regret it (one sit on me would squash me flat from that), but still.. how RUDE!!

My grandad was the pipe major in his Scottish regiment, I was raised to the skirl of the pipes (grin).