Cute Girls On The Beach 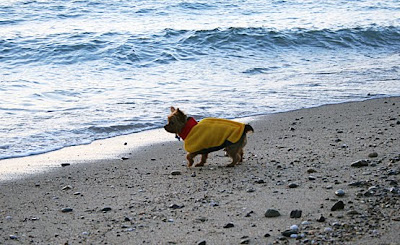 Heading back home today. Thank goodness it's a short week with the holiday on Thursday. I didn't realize how tired and stressed I felt until I took a few days away from work.

Every time I visit Provincetown, I think what it would be like to just actually live here. During the off-season, you get a chance to chat with some of the locals, folks who have given up the nine to five to live here year round. Most seem work in the service industry, bar tending or waiting tables. They work their ass off all season. When the fall/winter comes and the restaurants close up till the spring, they collect unemployment and, if they have made enough money during the high season, travel to places much warmer than Cape Cod.

I'm not sure I could actually do that, although about half of the folks I have spoken with seem to just thrive. One or two have mentioned they can't take another winter season. They say living here full time and visiting on vacation are two very different things.

Could you do it? Could you give up your career to live year round at the ocean, the mountains, where ever it is you love to go?
at November 22, 2009
Email ThisBlogThis!Share to TwitterShare to FacebookShare to Pinterest

What cute pictures....Glad you were able to take a break.

Not sure if I could do it. Unemployment doesn't pay enough.

You brought your babies with you. (smile)

Second, looking back on life now, I would absolutely advocate living/being happy with one's life and not attempting to find happiness in a vocation based on a paycheck. If living on the beach, in the mountains or middle of the desert makes you happy, then that's exactly where you should start.

Thanks Ang. It felt so good to get away.

Ronia you inspire me to think about doing what fuels ones passion.

Hi Ellie! Ok, that makes the count 2 - 0 for living where you really want to be.

Hey Chewy. Yes, the girlz needed a little vacation too. Cierra loved chasing the waves. It was her first time seeing the ocean. Not so sure if I could actually do it either but sometime it is very tempting.

Thank you Solo. I'll give the girlz a big kiss from Auntie Solo! I know what you're saying - I feel sometimes my long days are totally based on chasing the bigger paychecks I can get by commuting to Boston. I feel like I am missing out on a lot.

We've actually given it thought. If Fran's job could be remote, and I could do online University teaching or even teach in a local public school system, we'd do it. I don't think we'd want to do service industry work though.

But Chewy you could move to Ptown and be amongst the art mecca of the world! You could easily walk, bike or scooter to work. Collect unemployment on your off-season. Two neighbor ladies told us that they just bought a great big trailer home for $25k. That's cheap! They also own a condo (the size of a hotel room) and an RV.

I love asking the locals (transients mostly) how they like living there. In season and especially off season. It was very quiet when we were there this week and the weather was good. I can only imagine what it is like in January and February. QUIET.

There is so much of Ptown that I haven't even seen yet. I would love to take a month and just explore it in its entirety.

BTW the Senior class this year has a whopping SIX students graduating. Can you imagine that? SIX!

Blondie,
I had a friend in college who's family lived on Nantucket. Her Dad was a retired welder who became a metal sculptor and his wife owned a gallery on the pier. The off season there was beautiful.

I think I could do it. Especially since I've always said I'm going to spend the month of January on the Cape at some point. I'm one of those freaks who likes the grey/when the sky and the ocean meet. I could be quite content walking for miles down Race Point every morning. *sigh*

You have to travel light. Rid yourself of "stuff" that you really don't need. Reduce your debt to 0. No mortgage, no big credit card carry overs, no car payments, etc. Keep it simple and you can live just about anywhere you want frugally.

If I were on my own I could easily do it—I'm self-employed so I can work anywhere. I have often walked through P-town (and my favorite time of year there is off-season when you aren't constantly being gawked at by the straight folks who think the P-town and zoo are synonymous) and thought how great it would be to live there, maybe open a gallery and actually CREATE art instead of remembering I have a degree in it. But no, I have a nine -year old growth on my hip and he needs the community and stability I've rather painstakingly built up for him here. By the time I will be able to take off? Er...let me see...I'll be 54 years old. O.M.G.