Pictures From The Ride 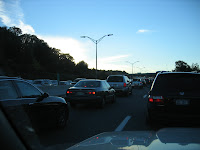 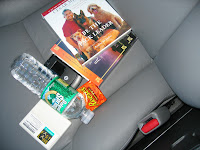 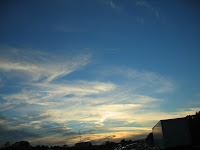 These are some photos I took while on my commute home yesterday. The top photo is the Mass Pike in Newton. This part of the Pike always stinks. You are bumpa to bumpa (as they say in Bahhston) so it's easy for drivers to see into other people's cars, which is usually ok unless you are snapping photos. Then you get some odd stares. People are so uptight when it comes to this whole safe driving thing.
The middle photo shows commuting essentials. Obviously you have to be careful with the water consumption (refer to photo 1). The candy has been in my car for a month - it's just an emergency snack in case I need a little sugar pick me up while driving. No coffee, for it can create issues similar to the water. Books on tape are a great way to pass the time. Creepy books are not good because they make me think someone who is hiding in the way back of the car will eventually pop out and kill me.
The last photo is a shot of the sky around 5:15 pm. This was tricky to shoot because that damn guardrail kept trying to come into my lane.
Maybe next week I'll try taking some shots from a different angle, like the backseat.
The Commuting Consultant

Anonymous said…
Hey, concentrate on your driving, missy! I have all Ann Rice's Vampire books on tape... and no tape player in my Jeep! (I'm on a rant about obsolete things. Aaargh!)
October 29, 2007 at 10:40 AM

Martini Cartwheels said…
I have to go with the more tame tapes on my drive or else I would end up scaring myself. Although I did love the movie 'Interview With The Vampire'.

I'm thinking my CD books and DVDs will be obsolete at some point too. Frustrating!
November 1, 2007 at 5:04 AM