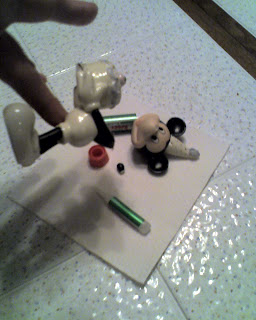 Mickey's head fell off. Then I dropped him for a second time and his nose popped off. No problem I said to myself. I'll just super glue him back together, quick as a wink.

Apparently it is much easier to glue epidermis to porcelain than it is porcelain to porcelain. Just when I thought it was safe to let go of the body, it decided not to let go of me. And taking the time to hunt around for my phone so I could take a picture was probably not the best idea since it gave the glue more time to become one with my skin.

Mickey still looks like he spent some time at The Tower Of London. And I still have super glue on two fingers and a thumb. At least I have removed the offending mouse.

My deep thought for the day is this. If you are going to glue something to yourself it should be something useful like a wine glass, not a headless cartoon character. Since it was attached to my middle finger however, maybe I should have left it there. It could have come in handy when driving in Boston.
Don't Try This At Home

Mon said…
I just snorted diet coke and it's your fault...the picture of you driving down the interstate with a headless Micky stuck to your middle finger has me in giggles...
April 10, 2008 at 3:06 PM

Me. Here. Right now. said…
At least you weren't fixing him over your toilet - I hear that particular part of your epidermis is VERY difficult to separate from plastic.

Martini Cartwheels said…
I probably would have done better Cristina if I had a glass or two. Maybe that was the problem.

Martini Cartwheels said…
LOL Robert. I'm moving on to the duck tape next. I think it is safer.

Cristina said…
Ya know you are probably right on that one, I can actually cut a good miter cut after a few before forget about it nothing lines up.
April 11, 2008 at 6:37 PM

Velvet Ginger said…
Okay...I had a good laugh at your expense. Is Mickey ok now?? I have a lovely antique cup with GLOBS of glue on the handle...that was a project after my 3rd beer.
You're not alone there girl!
April 11, 2008 at 7:31 PM

Martini Cartwheels said…
I have a good visual Rubye Jean of the antique cup with the globs of glue. I'm just thankful it dries relatively clear!
April 12, 2008 at 11:15 AM