One Minute And Counting 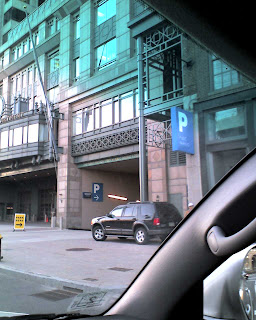 Parking isn't cheap in Boston. So when I met up with my niece last week after work, I told her I had to be back to the garage by 7:00 PM in order to qualify for the early bird parking rate of $17.00 (as opposed to the late bird rate of $30.00).

Too late to walk, we were still in the cab at 6:55, approaching the street on which the garage was located. It was one-way, which meant we had to jump out of the cab and make a run for it. After almost plowing over some tourists waiting for a bus at the Hard Rock Cafe, we made it to the garage.

"Wait here", I said as I ran up the ramp to the stairwell. Just two flights up and I would be at the car. Panting and feeling chest pains, I arrived at the car, threw my bag in the back seat, and drove as fast as I could back down the ramp.

For some reason I felt compelled to stop to throw my niece in the car before proceeding to the booth. I pulled her in and headed for the shortest line. She started whining about her foot being caught in the door but I didn't care. I needed that early bird rate damn it.

I get to the cashier at 6:59 PM (according to the garage digital clock with the bright red numbers). The cashier looks at me and smiles, to which I politely responded "PUNCH IT, PUNCH IT!".

Oh sweet victory was mine. Take that all you greedy Boston garage owners!
Reasons to Love Boston

Mon said…
I hate parking in the city...any city. I know the earlybird rate all too well. Lucky for me, the most I ever have to pay for parking at this point is 25 cents an hour...the blessings of living in the boonies.
April 2, 2008 at 10:35 PM

Martini Cartwheels said…
Hey OC - Glad to see you up and blogging!

When I go out in Northampton, it's something like 15 cents an hour. I love it. But in Boston, it's more like $5 for the first half hour and then so much per hour.

Unknown said…
Early bird parking rates?? I have never heard of such a thing.

Kansas City is fairly big city but not big enough that parking is like that.

I can actually picture you running those stairs...your friend half out the car clinging for her life...and some dramatic music as you wait for him to punch that card.

Me. Here. Right now. said…
Hey CJ, thanks for stopping by my blog - since the new design, the site is best viewed in Firefox - which may be why you don't see the button, but thanks for trying!

Martini Cartwheels said…
Oh Wendy parking is such a drag in Boston. They actually sell parking spots which go for over 100K. I'm not kidding - you get to own a spot. I think you can even mortgage them because they are considered property.
April 3, 2008 at 12:03 PM

Martini Cartwheels said…
Hi Hahn - I didn't see the button on your page so I just clicked in the vicinity of the upper right corner hoping to hit it.

Parking is even more fun in Boston when it snows. That's when some folks do leave their cars parked permanently or at least until the snow melts.
April 3, 2008 at 12:06 PM

Mon said…
It sounds like San Francisco and Boston have the same sort of parking issues. I remember always thinking, if I drive, will I be able to park? Will I get towed? Do they take Credit Cards, do I need Cash, Everything is much harder when you add parking in on top of it all.
April 3, 2008 at 1:04 PM

Anonymous said…
ah yes. boston and sf parking. leave the cars home. in cincinnati, no early bird opportunities, $10 the avg rate for a two hour trip downtown. if, like me, you don't want to walk too far in your mis-matched shoes.

Rita said…
Agreed. Even in my frequent visits to Boston I park out in the burbs and take the commuter rail. Now....not that I have any issues with dealing with Boston drivers...they are not an issue...but I am not going to pay $20+ to park down there! Lyn and I were up there last May and she just cringed at the thought of me driving around Boston since I am already a offensive driver! I told her you either have to keep up or get the hell out of the way.
April 5, 2008 at 8:36 AM

Martini Cartwheels said…
Rita you are so right about driving in Boston. You have to be offensive - just stick the nose of your car out there and go or else you will never be able to pull out. Driving in the western part of the state, where I now live, is much better.
April 5, 2008 at 9:26 AM