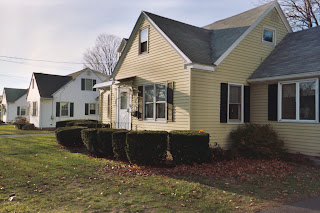 When you were growing up, was everything a big secret? At first I thought it just the street on which I grew up, which I fondly call 'the street that time forgot'. Then I met other folks from Chicopee and they had similar experiences.

I'm not talking about personal things, like how much you Dad made or whether or not your parents used to play escaped prisoner and warden's wife. But I can remember you were never supposed to talk to your friends about how much your parents paid for something, or any medical procedures anyone was having (unless it was your tonsils), or who was getting divorced.

Once my parents aged however, they had no problem telling me all the details of their colonoscopy, how many times they had to use the bathroom at the Senior Center, or how well their Polident Dentu-Grip was working that day. Now that's the stuff that should be kept a secret.

And by the way, that beautiful 1978 Chrysler Cordoba with the crank windows my parents had - it cost $8,000.
Growing Up Chicopee Life in Western Mass

Mon said…
Nope...that kind of stuff was never really off limits, although it wasn't considered very tactful to just talk about it either. But then you grew up in MA and I grew up in So Cal...big difference I'd say.

nrvag....I could think of a ton of not so tactful things about that word, but it's your blog and I'm not going to be vulger...hehe

Anonymous said…
Hmm? As a kid I never thought to ask those kinds of questions, but I can tell you all about my colonoscopy.
April 17, 2008 at 9:14 PM

Me. Here. Right now. said…
Oh, you forgot you never, ever talked about your parents politics. Asking who you were voting for was akin to asking if grandma still had sex with grandpa.
April 17, 2008 at 10:41 PM

Martini Cartwheels said…
OC - I will withold comments about the verification as well. Teeheehee.
April 18, 2008 at 10:30 AM

Martini Cartwheels said…
Chewy it was like we lived in the town of secrets. And not about really important stuff either. Maybe it's a Chicopee thing.
April 18, 2008 at 10:31 AM

Martini Cartwheels said…
Hahn you are so right. I forgot about that. We never talked politics, especially with regard to voting.
April 18, 2008 at 10:33 AM

Unknown said…
I remember thinking it was top secret how much my parents paid for our house....as well as other things. And no one ever talked about divorce. Hell, I didn't know my best friends parents were divorced until the day of her high school graduation and we grew up together....including sleep overs!! He simply lived in the guest room until she was out of school. Craziness!
April 18, 2008 at 11:17 AM