Question Of The Day - Where's Your Pumpkin From? 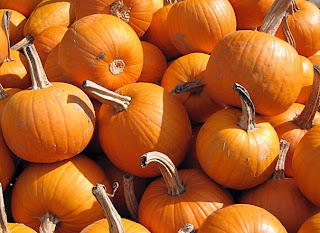 Blondie asked me the other day if pumpkins grow in Florida. I said "No, they grow in a pumpkin patch."

Being extremely ignorant of geography and what grows where, (despite getting an A in Plant Biology in college), I now need to know. Montana, Michigan, California, Oregon, Florida, Virginia, Texas, Minnesota, Ohio, Kentucky, Arizona - Do you grow your own pumpkins for Halloween or do you have them brought in from New England??
Any and all answers greatly appreciated.
at October 13, 2009
Email ThisBlogThis!Share to TwitterShare to FacebookShare to Pinterest
Labels: Places Other Than Western Mass

I was listening to NPR the other day because I'm a huge dork like that. 25% of all pumpkins come from Iowa. This year, due to all the rain, there will be a pumpkin shortage. The Northeast is expected to be especially hard-hit.

I get mine from southern NJ.

Aw shucks, of course we grow punkins in Texas! But they're so BIG, Yankees think they're Volkswagens. :)

I can technically cover three states for you -- Ohio, Kentucky, Indiana. I've bought pumpkins from honest-to-goodness pumpkin patches in each of them. There's one a couple of miles away here in KY as a matter of fact. Might stop there this weekend.

And in case you're wondering, we have X-Mas tree farms as well...

What! The northeast is going to be hard hit? Thanks for the heads up Allison. I better get my rear to the pumpkin patch.

Good to know Lesbo. Otherwise I was going to have to mail you one.

Solo! LMAO! Too funny. I thought it would be too hot in Texas to grow pumpkins! Now that I know however, I imagine they are mammoth. Miss you too buddy!

Lyn you rock! Three states in one shot - awesome. Ok, my snobby New England butt won't question you folks in other parts of the country again. LOL about the Christmas Tree comment.

@solohomo OK, I think I love you! That cracked me up!!

And, you, Ms. Martini Cartwheels - Michigan grows our OWN damned pumpkins! We don't need any imported ones. Besides - is there anyplace w/ room enough to grow pumpkins in New England?

Plenty of pumpkin patches here in Kentucky. Although I haven't picked my pumpkin up yet :( no fun carving alone.

There are local patches here in Washington. I get mine just up the road. And for thoes of you on the east coast, I mean the state of Washington.

Ok, Ok, I take it back. I just thought pumpkins needed a temperate summer and a cool fall to grow. I thought it may just be too hot in other parts of the country for pumpkins to grow. I stand corrected!

Too funny...we grow our own in VA.

I got mine in East Longmeadow on rte 83.

Shrinky grows her own. Makes pie and soup! She even sent me a photo of her pumpkin patch.

and she roasts the seed too!

I get my pumpkins from Ralphs supermarket.

Thought I felt my ears burning! Yeah, growing these little darlings is all fine and well, but it's me, the poor bloody cook, who has to invent what to do with with all the bloomin' b*****s, isn't it? There's only so much Pumpkin Pie and soup you can force down a family's throat, I've moved on to smoothie's, ice-cream and cheesecake now - and yeah, of course they taste like crap.

I'm gonna' creep out in the dead of night and torch them all, just see if I don't. Mutter, mutter..

From H&B: Of course they grow their own in Michigan...when we were on the farm--we grew our own! :) It was fun. We invited our friends' kids over and let them pick their own. Very fun...miss it...condo living doesn't allow a pumpkin patch! :(