Urban Word Of The Day

Ok, who out there knows the word we use in Western Mass for the ice cream truck? You know, the one that drives around the neighborhood in the summer, blaring The Yellow Rose Of Texas chords through the speakers, causing little kids to come running full throttle into the street.

I was surprised these even still existed. I saw one last night driving around my sister's neighborhood. And best of all, in addition to the new Dora The Explorer Bar, they still have Rocket Pops. If you look at the picture below, you can see the name above the windshield. Yes, that it correct - it is called a Ding Dong Cart. And the person driving? Why, the Ding Dong Man of course. 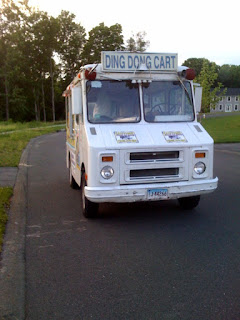 at June 13, 2009
Email ThisBlogThis!Share to TwitterShare to FacebookShare to Pinterest
Labels: Life in Western Mass

Playing the "Yellow Rose of Texas" in Mass.?

We've got some "ding dong" men here in Texas, too, but none of them are on an ice cream truck and they all have the same last name!

I haven't seen an ice cream truck since I was a kid staying at my grandparents house!! And i would have to pull teeth from my pappy, who had dentures already, to get the 50 cents from him to get a drum stick. Then i spent the rest of the day working off that 50 cent loan. LOL

We had one last year a guy from Lebanon drove the truck. This year no one's picked up our route. Thing is the corner gas/convenient store has some of the same items for a lot less.

Ding Dong Cart? That is gross to the max - like Ookie Kabookie GROSS, which is the worst kind.

Having grown up in Mississippi, I have no idea what "youse guys" call it. Ours played Greensleeves.

I dont know the name of the song our ice cream man plays. But he's here without fail each day. He shows up at all the kids ball games too. I call him Rat Bastard (in a totally friendly way of couse) but kids call him ICE CREEEEAAAAAM MAAAAAAN as they chase him down the street. I bet he laughs his ass off!

One comes down our street every day. :)

I have yet to go out there though.

I remember back in the day living in NY all you would see was raining alumiminum foil balls full of money from apartment windows from moms down to their kids. LOL

I don't think I've seen one of those since we moved to CT, used to have them in TX every day!

We had Mr. Softee. LOL Dirty old men must have though up these names!

well, does he deliver ding dongs too! those chocolate cakes with the whip cream in the center? i LOVE those almost as much as twinkies!

"Yo mama so poor, when you ring her bell, she sticks her head out the window and yells, 'DING DONG!'"

Hey Solo - It certainly got my attention. LOL at your ding dong comment.

I got a good chuckle at your past ice cream truck experience Amy. Too funny. I remember too when things on the truck cost less than a dollar.

Hi Windy! You would think they would have changed the name by now. Maybe back in the 70s it didn't sound so bad but today it is a little weird.

LOL Lilli! Is there a story behind the Rat Bastard name?

Hi Tina! So that's how they do it in the city. I never imagined it to be like that but it does make a lot of sense.

I'm surprised Pixie. I thought it was sort of a New England thing. Are you near the Mass border at all?

Hey Babs! The Ding Dong Man and Mr. Softee - oh that is just so wrong! Thank you for stopping by!

Hey Ms. Creek! I remember getting Hoodsie Cups and Push-Up -Pops (at least I think that is what they were called).

Are you serious Lesbo? Christmas in June? And I agree that is a bad, bad name.

Growing up we had MR Softie too...always said with lots of giggling.

Around here after about 3 rounds of the irritating song I'm ready to throw bricks at the icecream man...but I don't :)

LOL @ everyone being grossed out.

We have a regular (no ding dongs) ice cream truck. I should support it every now and then. I can't think when the last time I got ice cream from a truck was.