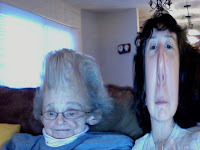 So the big question now is whether or not to bring my Mother Irene home from the nursing home for the day on Thanksgiving. Before moving on, let me just say that if I can't have a mini bar in my room when I end up in one of these places then I'm not freaking going.
Anyway, the plan was and still is to have Irene get strong enough and independent enough to move back in with my sister and her husband. So far that hasn't happened. Irene tells us she hates it there, despite it being, in my humble opinion, the nicest facility of its kind around here. And at 10K a month (I know this because she was on private pay until all the $$ ran out), my sister and I would love to have seen Irene back home by now.
We're thinking it's a bit cruel to take her home for the day on Thanksgiving and then bring her back to someplace she dislikes so much. On the other hand, we are told that this might be good a good test to see how she does in the house.
Irene is pissed and becoming a bit belligerent at the thought of still being 'imprisoned'. She doesn't understand the safety risks of having be at home alone during the day at my sister's house. The battle rages on. It's emotionally draining.
Did I mention the mini-bar that I'll be needing?
Irene and Me

Taradharma said…
well, consider the contents of the mini-bar would make you a fall risk, I think it's a no-go. Unless you agree to stay in bed and always ask for assistance to get up.

Take her out for Thanksgiving -- yes, she has to go back, but it will be a nice break from her daily routine.

I have a grandmother-in-law in almost the same situation -- if only she could be civil and nice, we might enjoy her company more. GET A CLUE!
November 20, 2010 at 7:10 PM

Martini Cartwheels said…
Tara - excellent point! I had not thought about the implications of the mini-bar use and the fall risk. Damn those bed alarms. This may require a little more thought...

KMae said…
Seems it might be safer to just take her to a restaurant rather than home since she'll never want to leave your home.
Good luck.
November 21, 2010 at 11:00 AM

Anonymous said…
Here in CT we have the Agency on Aging & they provide homecare helpers for my mother so she can remain in her own apt. Right now they do general housekeeping stuff, but you can also get personal aides for helping her bathe, etc. Medicare takes care of most of the fees, she pays a little bit. Does your state have something like that? The people are provided by companions & homemakers. Is that something your mom would be open to? If she doesn't like the person they send, she can ask for a replacement. Just a thought.
I couldn't remember my google account on a bet.
Barb
November 21, 2010 at 3:37 PM

Martini Cartwheels said…
Thanks KMae. I had a good visit with her yesterday and she seems excited to go home for the day. It may ended up being harder for me than for her when it is time to bring her back.

Hey Barb - Thanks for the information. I had wondered about in-home care. I guess my biggest concern with that would be trusting the person alone in the house with my Mom. I'm not even sure if that is even a valid concern or if I'm just being paranoid.
November 22, 2010 at 8:03 PM

Anonymous said…
getting 'the right fit' with someone is important & trusting them is #1. Depending on how you go, you control who comes in. In my mom's case, the agency assigns someone, they show up & mom tells her what needs to be done. If mom doesn't like her, or is dissatisfied or whatever, she lets the agency know. Her lady is only there for 2 hours twice a week and does laundry, vacuums, dusts, etc. not really there to engage my mom in activities, but you can get people to be full time companions that make meals, do shopping, take them to appts., clean, and also take personal care of the person and basically are with them all day. Don't know what medicare would pay(or if they would). We had a rep from the agency do an evaluation. We've not been worried about abuse or theft or anything like that, since my mom's pretty with it & her apt's pretty small & she doesn't really have any valuables to worry about. She has mobility problems so needed help with housekeeping.
Have a Happy Thanksgiving!
Barb
November 23, 2010 at 8:10 AM